At Emarketeers we regularly receive requests asking for a web analytics audit of some sort. When we ask what the client’s understanding of such an audit is, we tend to get partial and different answers. In recent times we have noticed a remarkable increase in these requests, and we believe there are reasons for this.

Google Analytics has been around for less than a decade. Since its introduction in 2005, it has seen widespread adoption. It is estimated that 80% of all websites today are measured with Google Analytics.

If you remember the early version of Google Analytics, then you will certainly recognize the dramatic changes in tracking codes, features and the user interface, particularly in recent years. What we often hear is that people feel “lost” amidst all these changes, especially now that Google has introduced Universal Analytics.

Not only has Google Analytics changed, in many organisations, web analytics ownership has changed hands several times over the past decade. Staff or agencies with knowledge of the original setup are no longer around.

And often, in organisations without a full-time web analyst, web analytics has become the responsibility of digital marketing or communications staff who lack specialist web analytics knowledge (congratulations, you’ve just become the web analytics go-to person). And juggling web analytics with an ever growing list of other tasks or projects usually isn’t a recipe for success.

Too often this leads to inconsistencies and errors in the way analytics profiles are setup (or views as Google now calls them). In addition, essential Google Analytics features, such as goal tracking, segmentation, filters, event tracking, to name a few, tend to go underutilised.

Another factor that plays a role is the ever increasing accountability for results marketers have to deal with. The economic crisis in recent years has increased the pressure on marketers to demonstrate return on investment. In organisations that were not early movers, we notice the crisis inspired a shift in focus to digital in the quest for ROI, leading to increasing demands on web analytics.

Ironically though, many online marketers today see them themselves confronted with long implementation delays, as web analytics change requests are deprioritized in the queue of IT requests.

It can therefore take several months to turn around requests. And anecdotes of tags being implemented after a campaign had already run are no rarity!

The requests for web analytics audits we receive usually tick several, if not all of the boxes described above.

Time to illustrate this with a case…Early 2014 a client tasked Emarketeers to audit the web analytics implementation on all of their websites.

Firstly, Google Tag Manager was implemented on six different websites that were part of the analytics renewal project. Implementing a tag management solution was necessary to cut back the implementation time of web analytics tagging changes from several months to literally several minutes.

From now, tagging changes can be made on the fly by the web team without the intervention of technical staff or developers.

To ensure the client’s web analytics implementation was future-proof, the new version of Google Analytics, Universal Analytics (which had just come out of beta), was implemented via Google Tag Manager.

Next, an automated Excel dashboard was created for each site using the Google Analytics API. The dashboards contain an overview of the main metrics for each traffic channel as well as trend graphs, thus dramatically reducing the task of data gathering and reporting for internal staff by many hours on a yearly basis.

“The data it outputs is going to be really useful in the reports I have to provide across (the organisation).”

A simple but straightforward Excel dashboard of all paid, earned and owned digital marketing channels that refreshes automatically 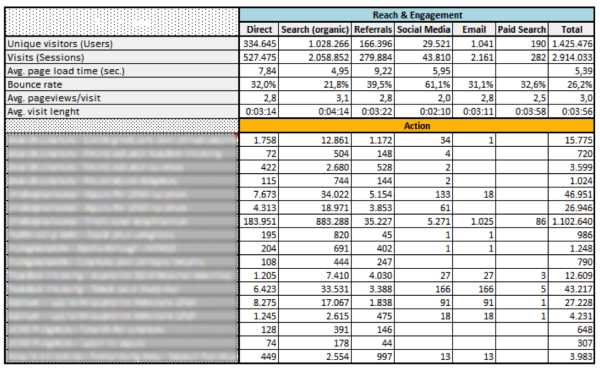 This kind of web analytics renewal via a web analytics audit is not unusual. A new start means marketeers can rely on and trust the data, be more agile and self-reliant when it comes to implementing tracking code changes, spend less time on routine tasks such as data gathering and reporting, and spend more time on generating and optimising results.