If you’re running SEO campaigns, you will most likely be glued to your Google Analytics, watching your organic traffic ebb and flow. Alternatively, if you’re using keyword ranking tools such as SEMrush, ahrefs, Search Metrics, Moz or others, you’ll be eagerly awaiting your weekly email, displaying the fortunes of your rankings that week.

It can be pretty stressful if you’re on a downward trajectory, and sometimes you’re left guessing why, especially when you’re ticking all the boxes with great technical SEO, customer-centric content and PR/link outreach.

It’s always worth reminding yourself that Google is pretty volatile. With approximately 500-600 algorithm changes happening yearly, there’s always a possibility that one change will affect your fortunes and negate your good SEO work. So, keeping on top of those changes is a must, if you’re trying to diagnose problems.

Below are 5 algorithm monitoring tools that measure search engine volatility, so you can diagnose SEO issues almost in real-time. Here we go…

SEMrush Sensor is a great feature-rich tool that packs a punch, with lots of ways to cut the data. And it looks pretty good too! It displays volatility in real-time, or you can look at retrospective data. 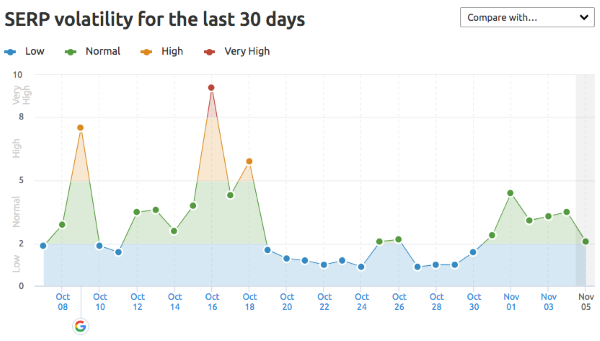 Its comparison feature gives it the upper edge, allowing you to segment data by SERPS feature, device, country and HTTPS results (which is generally pretty high and almost a moot point nowadays). 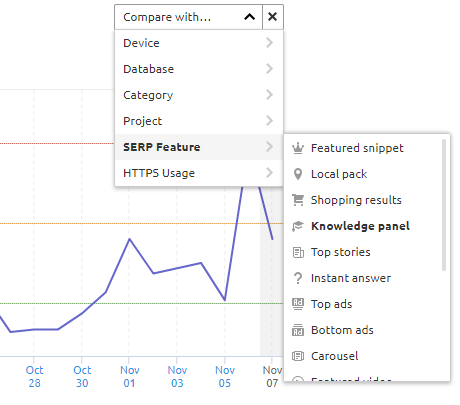 It’s a useful aggregator and benchmark, which illustrates the type of content Google is prioritising and will help inform your SEO strategy. 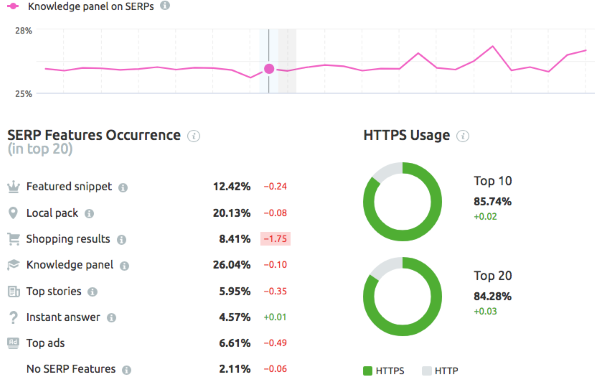 Within SEMrush’s paid tools, I particularly like its organic report, which illustrates performance over time correlated with Google algo changes that occurred at the same time. It’s an easy way to correlate performance gains and losses, and is almost an automated equivalent to Google Analytics annotations.

If you know a thing or two about SEO, you’ll know Moz. Mozcast is part of the Moz ecosystem and shows Google’s volatility as a metaphor for the weather forecast. Hot days = change is happening. Cooler days = all quiet at Google. Simples. 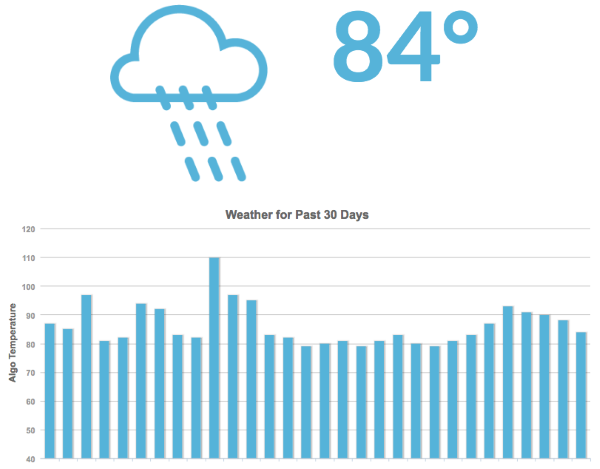 Furthermore, if you want to track changes to major SERP features such as people also ask boxes (PAAs), knowledge panels, local packs, videos etc, Mozcast’s Google SERP Feature Graph will do the trick in a nice interactive format. Given Moz’s stature in the SEO business, it’s solid and trusted, so check it out. 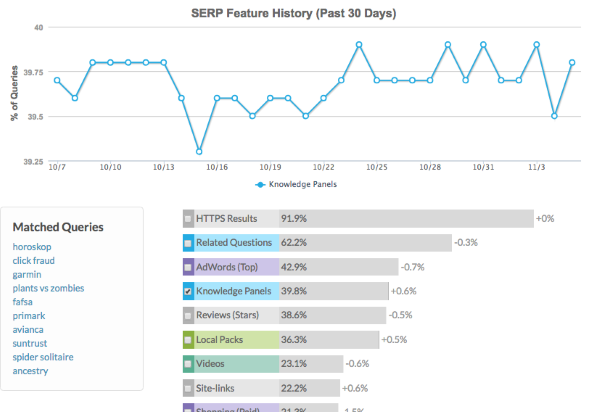 Algoroo also shows Google volatility via an interactive tool, that lets users change the time period via drag and drop. This is a great feature and provides data from 7 days to 2 years.

The longer range data is quite useful if you’re retrospectively analysing your SEO performance and you want to correlate it with Google algorithm changes, especially the more impactful ones. 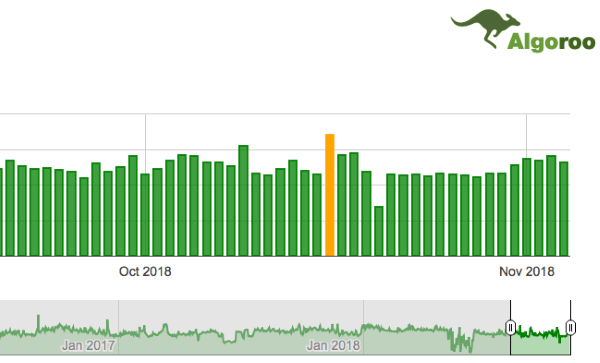 It also provides both desktop and mobile data, which is an added bonus. At the moment, users can also choose from Google.com and Google.com.au. It would be really handy to see other local versions there in the future.

Accuranker is a paid tool, but has a freebie called Google Grump. As the name suggests, it shows how grumpy Google is. The worse Google’s mood, the higher the volatility. Like Algoroo, you can segment the data by time, and it also publishes a handy reference to major Google updates wherever you see the “G” symbol at the top of the graph. 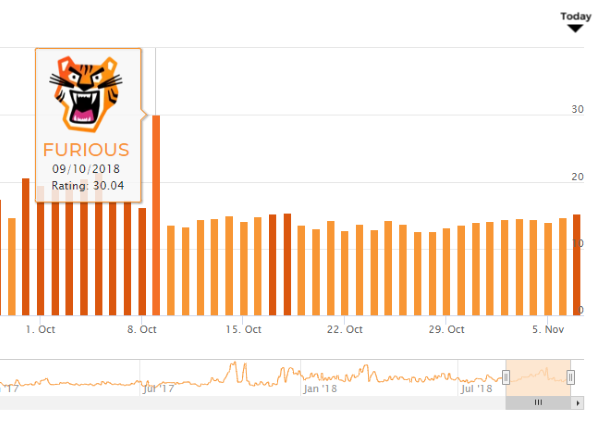 Accuranker has a decent selection of local Google search engines, including US, UK, Australia, Netherlands, Denmark, Germany and France – both desktop and mobile editions.

While Accuranker Grump isn’t as feature rich, it’s interface is good and it definitely wins the award for the most original name. 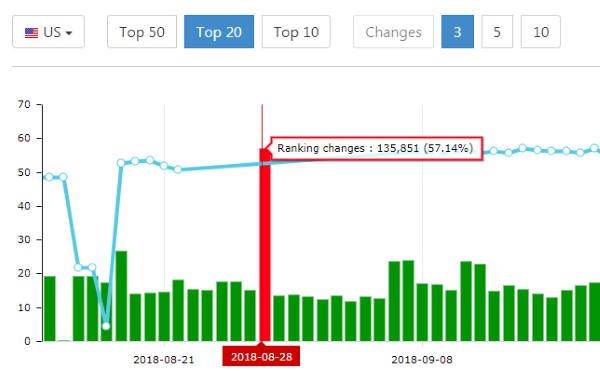 Advanced Web Ranking has a number of tools in their lab, one of which is the Google Algorithm changes tool. The tool allows you to view various local Google indexes, including US, US Mobile and UK among others.

You can also cut the data by the top 10, 20 or 50 positions on Google, to see how fluctuations have affected different pages. And like the other tools, you can view data over different lengths of time. There wasn’t quite as much flexibility in this regard, but enough to see major algo changes. 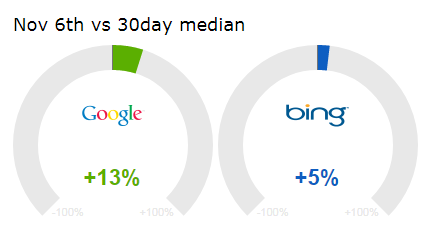 The least feature-rich tool is from SERP Metrics. And whilst it doesn’t offer as many data options as the others, I do like the way it separates Google and Bing data. It also allows you to toggle between the top hundred results vs page one only.

If you’re looking to connect to its rank tracking API, SERP Metrics allows developers to pay for an API key. Handy if you’re creating your own tool or dashboard.

It appears to be limited only to US data, but is still worthy of a mention.