How do you market to Gen Z and Gen Alpha?

Much has been written about the differences between Millennials, Gen Z and now Gen Alpha, so I’ve hesitated before adding to the noise. Especially as I’m not really a believer in pigeon-holing vast swathes of the population into one broad category. Adapting a brand’s marketing approach for someone born between 1995 and 2012 (a Gen Z’er) seems about as sensible to me as tailoring a message for someone with the Sagittarius star sign (born between 23 Nov and 21 December, in case you’re wondering).

It has, however, become fashionable for marketing professionals to use generational tags, like Millennials, as a shorthand for audience age segments they wish to target. There can be merit in making a generational distinction where attitudes and behaviours are consistently differentiated between generations. And in recent years, it’s the extent of familiarity with technology that has become one of the strongest points of differentiation between generations.

So let’s begin by looking at the broad generational categories. I’ve highlighted those that most marketing folks are focused on today; if you’re still targeting The Lost Generation this table may help you understand why revenue is drying up: 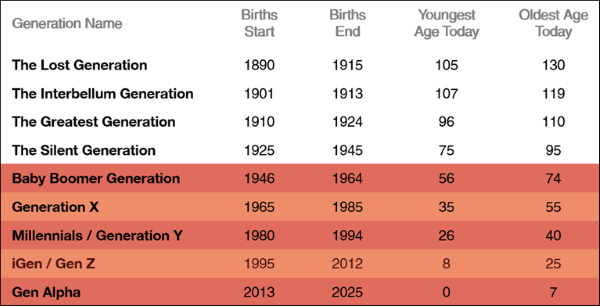 It’s sobering to realise that this year, Millennials, the first generation to have never known a world without computers—are all grown up and, dare I say it, middle-aged, with some celebrating their 40th birthday in 2020. In fact, this group makes up the vast majority of junior and middle managers working today. Far from being a niche collective, millennials have now become the dominant generation in the workplace with a buying power that should appeal to any marketer.

But it’s Gen Z and Gen Alpha that are now set to introduce the most change into our world. Gen Z lives have been defined by divisive issues like the Great Recession of 2008 and ISIS, but also by uniting forces like marriage equality and the election of USA’s first black president. This gives many of them a different outlook on life to older generations.

While many millennials grew up in non-competitive schooling where “everyone gets a trophy”, those in Gen Z are more likely to appreciate that success usually stems from hard work and effort, not luck or a God-given right be a #winner. They are often characterised by a sense of grounded realism, where the level playing field of equality and fairness means that those who deserve to win should rise to the top.

They’re also acutely aware of the importance of managing their personal brand with care. Far from being zombie-like screen addicts, many in Gen Z actively use their devices to carefully curate their online persona to maximise their opportunities in life. They use social media to build their personal brand but resist being defined by it. And while they seek social validation and inclusion, they often look to differentiate themselves professionally online to carve out their unique niche.

Compared to Millennials, Gen Z consumers are more likely to flit between 5 or more internet-connected devices. They often demonstrate a familiarity and confidence with technology that baffles many of us older folk. Gen Z owes this ability to their being exposed to fast computing and instant access to information from a very young age. Many often demonstrate an almost super-human capacity for multi-dimensional thinking because their brains have literally been moulded differently, allowing them to multitask, learn new skills and solve old problems in unexpected ways. The price they pay for this ability is sometimes a loss in attention span and an incapacity to maintain focus on undesirable tasks. Maybe Gen Z is not so super-human after all.

Which channels should you use to market to Gen Z?

Marketing case studies that claim to demonstrate successful engagement with Gen Z consumers invariably focus on youth-focussed video channels like Snapchat, Instagram and YouTube. However, some of my favourite examples of brand adaptation for Gen Z consumers are found in more conventional social media channels like Twitter. Innocent Drinks has a long history of using a quirky tone of voice to differentiate itself in a sea of competitor brands. Today, it excels at engaging Gen Z followers using short and snappy tweets, that have helped it attract a commercially valuable fanbase.

You can make pancakes with our dairy free range.

We don't know the ins and outs of it, but it's probably pretty straightforward. #PancakeDay pic.twitter.com/6cFAtUDdnJ

Flight attendant: Is there a doctor on this flight?

Dad: *nudging me* that should've been you

Me: Not now Dad

Dad: Not asking for a Burger King to help, are they?

Dad: Go and see if a “Whopper" helps

While Twitter isn’t always the optimal channel for every brand, there’s much we can learn from the tone of voice deployed by brands that successfully engage Gen Z customers. The brevity, tempo, and general light-heartedness of these communications can easily be transferred into other channels like PPC advertising, email marketing and web design. When targeting Gen Z, it’s important not to limit your thinking to emerging youth-centric digital channels; the medium you select is arguably less important than the style and tone of voice of your message.

How do you target Gen Alpha?

And what of Gen Alpha, those born since 2013? It’s too early for most marketing professionals to be focussed on this group; they’ve barely started at primary school after all! We do know though that this new collective was born into a world of ultra-high-speed, ubiquitous computing. For them, the concept of talking to devices, never having to memorise facts, and ultimately earning a living doing gigs not jobs will be the norm. They will inherit the climate crisis and a political landscape shaped by the rise of populism and extremes and their attitude to work and consumerism will be reshaped accordingly.

Crucially, the lives and outlook of Gen Z will be defined by the technologies that emerge in the next decade—think AI, robots, voice control—as well as shifting political and societal norms. To get a head start on Gen Alpha, pay close attention to the macro trends that form during the 2020’s and consider how this upbringing will influence the next generational wave of shoppers.

We don’t yet know how Gen Alpha will turn out, but we can be sure that their differences to us oldies (I’m talking about you, Millennials!) are likely to be far more defining than any generational leap we’ve seen before. In our marketing profession, things will never stay the same for long.